How do you encourage developers to be more productive?

A few months ago, I was intrigued by a presentation by Dan Pink, an American public speaker. Here is a version of that presentation (and there are a few similar presentations around, including a TED talk).

In the presentation, Pink claims that extrinsic motivators, specifically financial incentives (bonuses, raises, promotions, stocks,…), can be counter-productive to the goal of encouraging workers in certain circumstances. In the presentation, Pink refers to studies at MIT, so I went searching for publications for these studies and found Ariely (2005) and Awasthi & Pratt (1990).

So if money doesn’t work, what does? Pink’s thesis is that employees will be more productive when they have a sense of:

Pink refers to cases at Atlassian and Google, where employees are reported (in the media) to receive many perks. I’ve been to Google, and while I did enjoy the free food, the work environment was certainly not anarchistic, in fact it seemed quite ordinary on the inside. What Pink emphasises is that these companies offer a degree of autonomy to their workers, that employees have the potential to develop professional masteries for their current job and for future jobs, and that employees are able to see a sense of purpose in what they do day-to-day.

Some aspects suggested by Dan Pink were already in place at Moodle, but some have been added or enhanced in recent months. I will describe how we offer a sense of autonomy, master and purpose to members of the STABLE team at Moodle (the devs who work on the existing releases of Moodle).

Apart from being a relatively relaxed working environment, there are some specific differences that may set Moodle apart from other development offices.

Mastery is an area we could be working more on, but there are a few initiatives in place at Moodle.

Purpose is something that Moodle has a lot of. Moodle allows many people to access education, some of whom would not be able to do so otherwise.

In saying that, it is easy to lose sight of that purpose when devs are focussed on lines of code while reading the grumbles of users on bug reports.

It is important t0 regularly remind developers that there is a community out there and they really appreciate the work devs are doing. We have, in the past, dragged devs to a Moodle Moot, where there is a lot of back-patting. We are hoping to do that again this year.

If you are a member of the community and wish to express your gratitude, please do so. Send me an email or post a message on the Moodle forums. It will really help.

Do these incentives work?

From my perspective, I would have to say “yes” – encouraging a sense of autonomy, mastery and purpose does help developers, their progress, as well as the general working environment. It’s hard to quantify the effect of making these aspects more obvious to developers, but I have noted some improvements since we have.

An optimised view for the Gradebook (Rajesh Taneja)

There are a number of issues relating to the usability of the Moodle Gradebook, which can become unwieldy. With some simple modifications, the Gradebook becomes a much more usable space.

The MDK automates many regular dev tasks including Git operations, adding information to issues on the Moodle Tracker and automation of site instantiation and population with dummy data. 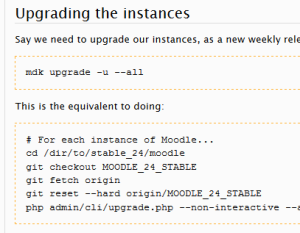 This project has been quite a collaborative effort and is still growing.

3 thoughts on “Incentives for Developers”